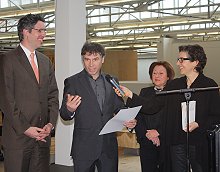 The Aachen Art prize is funded by the Association of Friends of the Ludwig Forum and by the city of Aachen and by Aachen trade and industry. Every two years this prize is awarded by international adjudicators to prominent artists who have given vital stimulation to the international art world. The Prize is endowed with the sum of 10,000 Euros. The Prize-giving is always linked to an exhibition in the Ludwig Forum.